"The Devil's Vineyard" by Barbara Kevern 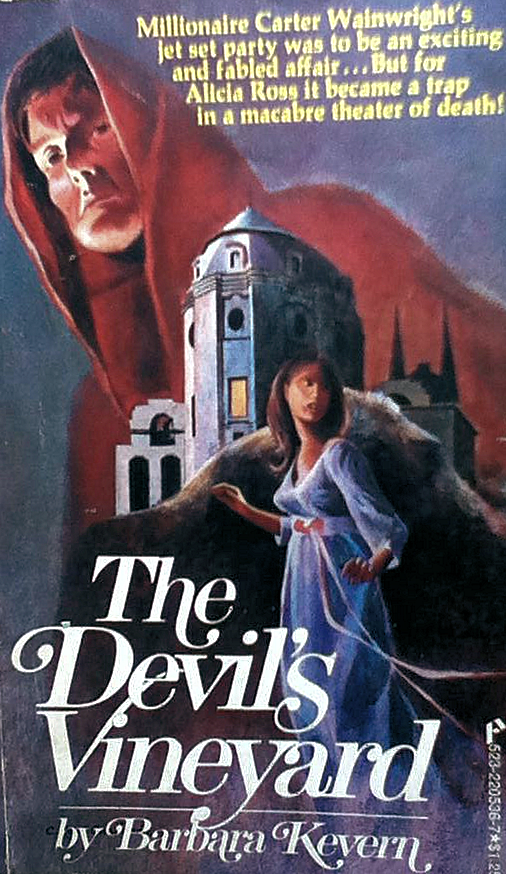 "Then it came again, more clearly now.  It was a thud, soft and muffled.  And it was followed by a groan.  Could she really be hearing these things, or were her ears playing tricks on her?  There was another thud, and now Alicia located its source.  It was coming from behind a door just ahead.

Impulsively, Alicia moved forward and opened the door.  She was not prepared for the sight that greeted her eyes...In another second Alicia was racing along the hallway, fleeing from the most horrible thing she had ever witnessed..."

Alicia, a photographer fresh out of New York City, is on assignment in San Francisco when she agrees to meet up with her old college roommate Jolene (and Jolene's husband Richard) for an evening dinner party.  Dinner is calm as expected, though Alicia feels that something is a little off with her old friend, rather it be age or exhaustion.  And Richard regards Alicia with little, to no, interest.

However, the calm dinner date changes when wealthy wine tycoon, Carter Wainwright, joins their table and invites them to one of his lavish jet set parties at his mansion by the sea.  At first Alicia is nervous, she knows she has a plane to catch back home the following afternoon but Wainwright promises she'll be back in time for her flight.  Alicia is even more surprised when she, along with her two friends and a room full of well-to-do looking guests, are being whisked away on a private jet!

The night just seems to grow more and more bizarre, particularly when the plane touches down to a swift reception to hooded figures, whom Jolene says are part of a devil-worshiping sect!  As the evening proceeds, Jolene finds herself being accosted by drunkards, drugged by devil-worshipers who wish only to bewitch her into bed, and to her horror the mansion is home to real, underground shark tank where the guests are all-too-giddy to throw innocent animals to feed the creatures as if it were some kind of sick show.

Alicia rides out the weird night with only one thought in mind, getting away as soon as possible in the morning as no buses currently are traveling to to the treacherous place and she must await Wainwrights jet to see her to her hotel.  But before she knows it, she's finding dead bodies in empty rooms.  She's being locked into secret passages with corpses and chased into underground catacombs by a mad man.  It is only when she sees her beloved friend tossed to the sharks as a 'worthless drug addict' that Alicia feels she might not make it out alive.

However, a drunkard turned special forces agent, Clayton, hopes to save Alicia.  it seems Wainwright isn't independently wealthy and a dangerous drug-bust is in swift order.  But will she find never-ending love or just a quick, terror-filled ending on the rugged beach cliffs as two mad men take her hostage in their twisted plan to escape.

I thought this was a great read.  It was refreshing to see a heroine who was bold and brave, as Alicia was both, and she kept her wits about her throughout the harrowing ordeal.  The love story in the last few pages was a surprise ending!  Excellent read!