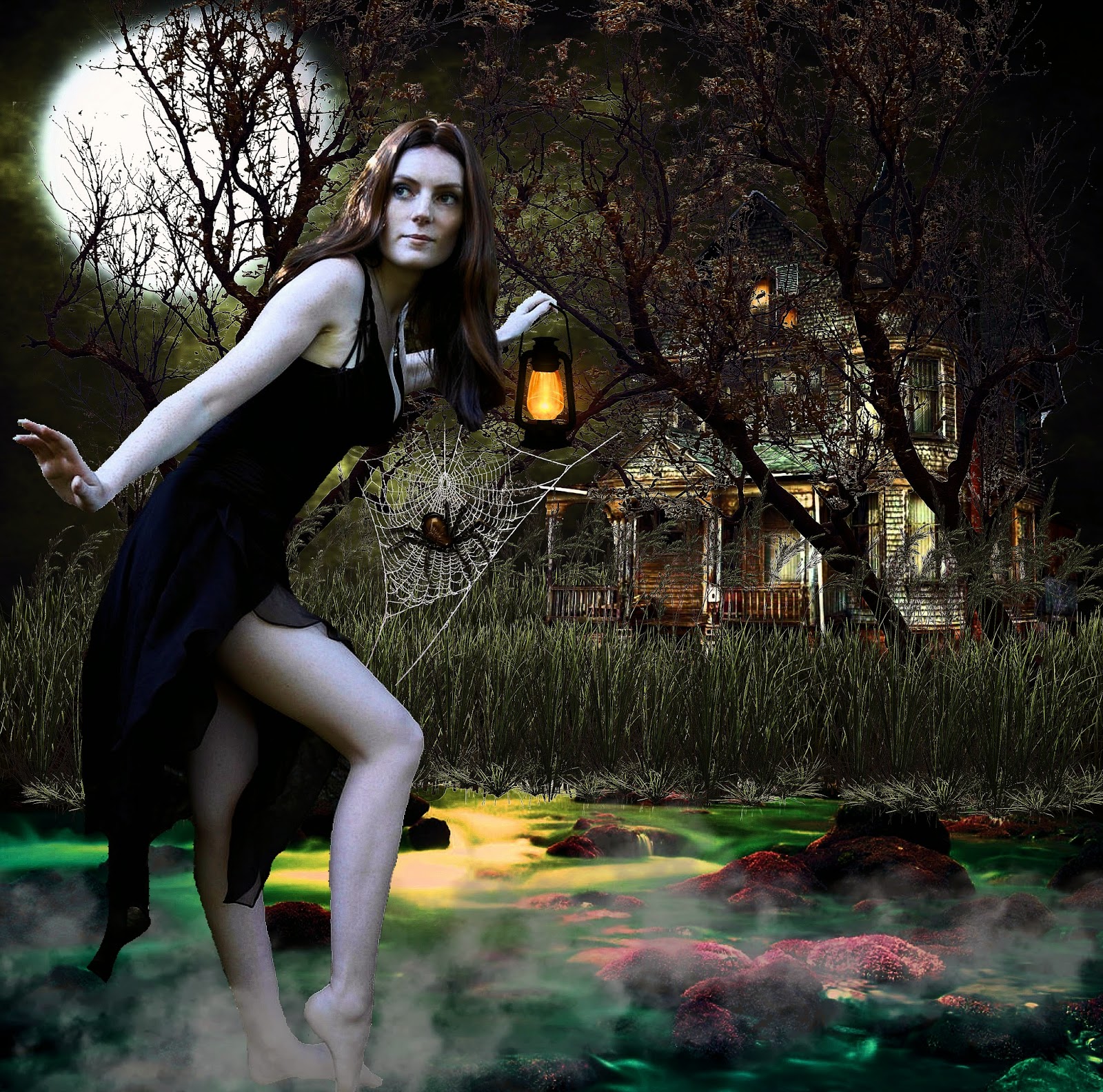 The wind whistled an eerie song-song as I made my way up the steep incline between the trees.  After ten minutes or so, I paused, exhausted from the exertion of climbing.   My calves were cramping painfully from the effort.  I prayed a house lay somewhere over the hill ahead.  Clouds from an impending snow storm had all but blotted out the yellow spotlight of moon, leaving me to battle the elements with only the sparse light of the stars.  I ducked my head deeper into my jacket as flurries began to fall softly.

As I neared the top of the steep hill, I could barely discern what looked to be a small log cabin in the distance.  It sat nestled between a thicket of trees in the valley of the forest.  I could not recall ever seeing it when I played in these hills as a child but reasoned I had also probably never ventured this far into the woods.  The thought that I could be miles deep, lost in the forest on a winter night with heavy snow beginning to fall, brought fresh tears to my eyes.  I was cold to the bone and shook my head, as if to clear the tears.  I could be out here all night before anyone found me.  My best hope now was that someone who lived there could help me.   At the least, there would be a fire to warm myself and a place to stay until morning

I bound down the hill, steadily making my way towards the cabin.  But as I neared, I saw with dismay that it was not a cabin after all.  It looked more like a makeshift shack.  The roof of the porch sagged in protest against the heavy blanket of frozen snow.  There were a few missing floorboards in the porch.   Dried, rusty residue had dripped from the metal of it’s tiny window.  The place looked like something out of a scary movie.  A place where the reclusive outcasts from society might dwell to escape the repercussions of law.  For a moment I stood frozen of indecision.  What if some such a person resided in the old building right at this moment?  Could it have been the same person who had chased me through the trees earlier?  And what might they do to me, an intruder?

No light emanated from the window.  And besides, I really had no choice.  I could either stand outside in the snow and risk freezing to death from the elements, or I could seek refuge in the shack.  Carefully I ascended the three rickety steps to the porch.  With each step I took, the floorboards moaned and creaked so loudly I feared they might give away and plummet me dangerously into the crumbling foundation.  I tip-toed carefully, aware that injuring a leg or ankle might certainly mean freezing to death.

I reach for the rusty knob and pushed the door open.  The hinges detested creakily, but thank heavens it wasn’t locked!  There obviously was no electricity and it took a moment for my eyes to adjust to the enclosed darkness.  As I looked about the shack, I could tell someone had frequented it often, and recently.  There was a makeshift fireplace, a pile of ashed cinder the meager remnants of a previous fire.  A dwindling pile of firewood sat in a corner to the left of the fireplace, and a small shelf stood in the right-hand corner.  It looked to be full of linen, towels, and a hodge-podge of miscellaneous items like dishes and knickknacks.
The wall to the left nestled a rusty old-fashioned water pump.  And a small farmers table with two chairs that looked as if they’d collapse under one’s weight sat in the center of the room atop a braided, threadbare carpet that looked to be about as old as the cabin, itself.  But what struck me most was the décor.  Several framed floral pictures had been hung across the wall in a haphazard artists’ fashion.  A pink shag rug lay near the fireplace, old and withered but still soft enough to serve its duty.

There was no mistake, the room had the distinct feel of a woman’s touch.  A young woman.  A woman like Vanessa!  I reeled at the sudden thought, clutching the splintered doorframe for support.  Instinctively, I knew Vanessa had been there.  She’d been there recently.  From the frilly pink ruffle of curtains that veiled the weathered window to the old purple fleece blanket thrown across a rickety armchair,  I was sure.  I imagined a happy Vanessa, escaping the clutching eyes of Grandpa Wayne,  bringing her love interest to this little shack in the woods for their time together.

Unafraid now, I stepped into the room and ran a finger across the dining table.  No dust!  So she’d been here not long ago.  My heart raced, perhaps she was here now.  Maybe she was hiding somewhere.  My hopes plummeted as I realized that in weather this cold, especially with a snowfall on the horizon, surely if anyone currently inhabited the cabin there would be a fire.  Vanessa and her boyfriend, Keith, might have taken refuge in the small room recently but I knew they were long gone by now.  But where to?  That was still the mystery.  At the moment I had more dire things in mind, like staying warm.  But I made a mental note to come back later and give the shack a good look over.  That is, if I made it through the night without freezing to death.

Returning to my senses, I walked across the room and took inventory of the fleece blankets.  There was only two and they smelled musty, but they meant warmth.  If I could just warm my hands enough to look for a match and light a fire!  I folded the blankets to make them thicker, then wrapped them around me.  Exhausted, my body aching from cold and the long hike through the snow, I sat back in the armchair.   As I sat there, inviting the sensation of comfortable warmth that had began to spread to my limbs, I couldn’t help but wonder who had chased me through the woods.  Who would want to scare me?  Maybe Greg wanted to scare me away, after all he’d told me boldly to leave.  I thought back to my first night at Hollow Wind and the grotesque figure that had warned me of my own death if I stayed.

I sat up, rigid with the fear of a new thought.  What if someone had chased me to this cabin, only to corner me there? What if they waited outside for me now?  How convenient it would be to kill me and throw me over one of the heavily wooded ravines, or into the icy river near-by.  After all, I’d been roaming the unfamiliar hills in the dark.  What a horrible accident my murder would seem to all concerned.


I swallowed hard, noting how dry my throat was.  I would not leave the dilapidated shack tonight, of  that much I was sure.  I worked one of my arms lose and dragged one of the wooden chairs to the door, wedging it tightly beneath the knob.  I wasn’t sure how much good that would do against an intruder, but it was better than leaving the door open!  More tired than ever, I made my way back to the chair and decided that once I could feel my hands again I would work on lighting a fire.  As much as I hated the idea of it, I would spend the night in the cabin.  First thing in the morning I would set about finding my way back to the farmhouse.  Besides, once it was light out, I could retrace my footsteps.  And I was sure no one would risk an attack on my life in broad daylight.

I must have fallen asleep, for the next thing I knew voices were yelling and my makeshift barrier had been splintered to pieces as someone forced the door open.   I yelped, a bird caught in a trap.  I had nothing to protect myself with.  No place to dodge for cover in the sparsely furnished room.  Then someone shined a light in my face, nearly blinding me.

“We’ve found her,” Greg yelled over his shoulder.

Then a series of other voices as the old shack flooded with light and the faces of several burly men I did not recognize.  I’d never been more happy to see a bunch of people I didn’t know!