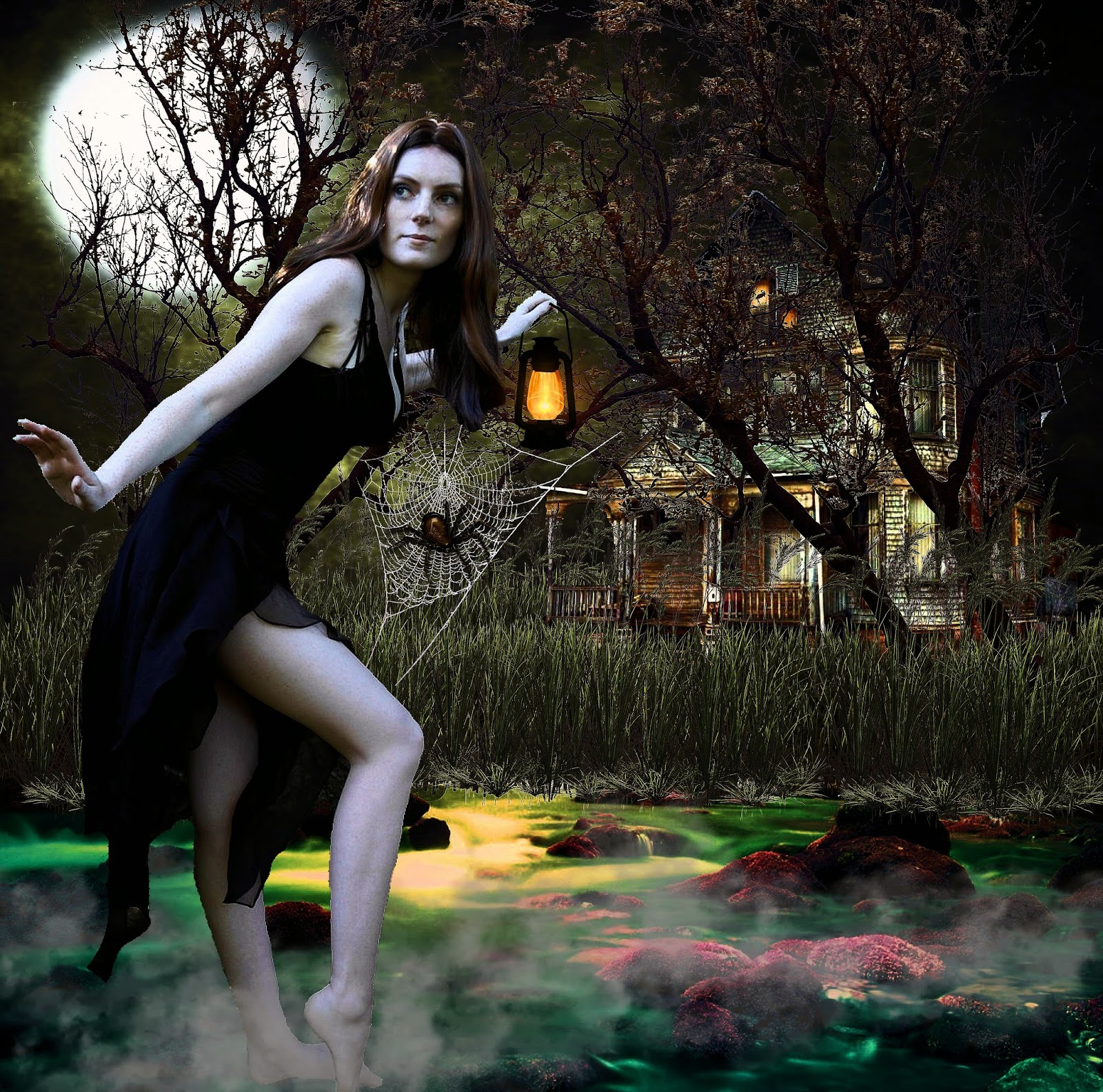 The remainder of the night whirled by me in a series of images with no solid recollection.  The men who helped walk me back to the warm house, local farmers from the nearby Amish community, I would later be told.  How I’d welcomed the warm blankets and hot cider, sent by  their wives, harried with worry for a local girl lost in the woods. That night, they would hold their own daughters a little tighter.

Then there was Greg, leading the pack and squeezing my hand, telling me I was safe now.  Even in my disheveled state, I could tell his demeanor towards me had changed.  He was looking at me intently.  Was that sincere concern I saw in his eyes?  No whispered words of warning or bitter premonitions this time, only his warm, calloused hand steadily leading me home.

I sobbed as the old, be-draggled farmhouse came into view.  Each well-lit window shining  like a yellow beacon.  First I was overcome with hugs from a tearful Grandma, guilty for having asked me to call for Shadow.  Then scalding, black coffee was forced into my chapped, quivering lips by Libby, who’d been the first to realize I’d never come back .  Aunt Helen was quietly pacing back and forth in the sitting room, her right hand clasped so tightly to her cane that I thought she might lose circulation to her fingers.  I could only imagine what they had thought.

I remember trying to speak, descriptions of Vanessa’s makeshift shack on the tip of my tongue, shining pink behind my eyelids.  My cousin, my best friend, my childhood folly…now gone.  No words would come.  Only wretched, choking sobs that tore from my throat in waves.

Hysterical beyond comprehension, and babbling like a mad woman, I remember someone calling Doctor Sturgill.  And mere minutes later an old kind man, eyes crinkled at the corners in a permanent smile, savior who gently sedated me with a shot I didn’t feel at all.  And then nothing but a blessed blackness as I fell into slumber.

I awoke with a start.  The dream was in the back of my head, a secret place behind my eyes, yet I couldn’t fully recall it.  Someone screaming.  Their eyes frozen open.  A scream forever silenced in the cold, open ‘o’ of their mouth.

I raised up, slowly, wincing from the stiff twitch in my lower back.  I guess that was to be expected after a one-hour trek through snowy woods.

“Not so fast, there.  Doc says you gotta take it easy.”

I looked up to see Greg sitting in the armchair across the room, his creamy skin and blue eyes a sharp contrast to the floral upholstery.  I wondered how long he’d been there and instantly concluded he must have held vigil the night before, when I’d been guided to the room in hysterics.  He smiled and tipped his hat as he sauntered towards me.  Perhaps I was still dazed from the events of the previous night, or the sedative, or both, but his eyes seemed to hold a certain, mischievous twinkle.

I shook my head.  No way was I going to get fancy on the house help.  Particularly one who hadn’t given me a very friendly reception.

“Nonsense,”  I shot back.  “I’m perfectly capable of getting out of bed on my own.  Besides, I’m starved.”

He might have played a hand in rescuing me, but I wasn’t going to be so quick to forgive the way he'd treated me when we met mere days ago.

He smiled a little and tilted his head, as if he were secretly making a decision.  Then he gently sat beside me.  He wrung his hands nervously for a few moments, then touched the frizz of my hair in a brotherly way that embarrassed me.

“Listen now,” this was the first time I took notice of his Southern drawl.  He scratched the stubble on his chin thoughtfully and then went on.  “I know I wasn’t the nicest to you the other day, but this whole thing with your missing cousin has been grating on my nerves for weeks.”

“But whatever can you mean?”  I said, worry furrowing my brows in a way that made my head begin to ache.

“Something around here just isn’t right.  And you seem like a nice girl.  Right now just wasn’t the most opportune time for you to walk in here, on this whole mystery. “  His eyes crinkled, pointedly boring into my own.  “Or this crime, which I think it is…I’m not sure your cousin would have just up and ran off without telling me.  We’ve been friends for years.”

I laid back against the pillows and sighed.  So there, I had it, someone else who had suspicions.   Maybe I wasn’t so crazy after all.

“I think someone’s done something to Vanessa, and I think it’s someone who is closer than you might think, Aubrey.  And I want you to be careful not to go letting anyone know that your suspicions have been aroused.”

“But someone, they chased me last night,” I spat out.  “Chased me until I was lost, delirious from the cold.  Once they got me out into the woods with no idea how to get back home, I heard them walking away.”

“Are you sure of that?” Greg stood up and began to pace, his arms crossed, face pinched in concentration.

“I’m one hundred percent positive, Greg,” I shot back.

And then I told him of the cabin, which he’d already known about long ago.  He reassured me he’d already went through it with a fine-toothed comb, yielding no evidence and no clues.  And while it was fresh in my mind, I told him of the grotesque thing that had lured me into the hallway, it’s eerie warning, the way it had knocked me down and ran off into the shadows of the corridor.  He listened, his eyes wide and angry.

“Someone doesn’t want you here, Aubrey.  I think they know something and they are trying to spook you away.   We don’t know who it is yet, that’s why we’ve got to be careful,”  he said again, gently touching my hand.  “And I don’t want you roaming around in the woods alone again, you hear me?  At least not in the dark, and not without keeping the farmhouse in sight, okay?”

I assured him I would not and he left the room to give me privacy, promising that Libby would have a hot plate of breakfast awaiting me once I was dressed and ready to go downstairs.

“Oh,” he said, reappearing in the doorway.  “I have to drive into town tomorrow morning, need to swing by the hardware store and the post office.  Your grandmother said you might be interested in getting out of this house for a while.  What do you say we make a day of it and have lunch, maybe do a little sight-seeing?”

“Hm,” I pondered for a moment, my smile a dead ringer.  “I think that sounds lovely.”