'The Secret of Greystone Hall' by Elizabeth Wilde 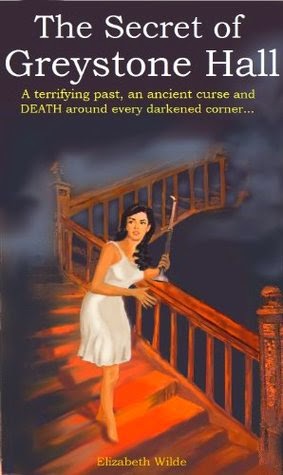 ...a restless wind stirred through the Birch trees that lined the estate.  The pasture and the courtyard far beyond were lost in complete blackness; a solitary post lamp at the edge of the courtyard was her only light, and it served as a welcome beacon in a sea of darkness.  As long as she kept her eyes on the tiny light, she would make her way safely, but still, she wished now that she had allowed Rayne to drive her home...

It was when the wind in the trees suddenly died that she heard the footsteps rapidly approaching her from behind.  She turned to see who was there, but she could not make anything out in the darkness.  She picked up her pace, but the footsteps came on faster.  Someone was chasing her.

She tried to run, but her feet got tangled in the thick goat weed that grew in the pasture.  She tripped several times...At first she could make out nothing.  But slowly, before her astonished eyes, a figure in black began to emerge from the night...

SHE HAD TO UNCOVER THE DARK MYSTERY OF THE EERIE ESTATE BEFORE SHE FELL VICTIM TO ITS EVIL! After the sudden tragic death of her parents, Abby Sanders is invited to travel to the Green Mountains of Vermont to stay with William Drake, the brooding old master of Greystone Hall. Then suddenly the man vanished. All too soon she finds that the corridors of the gloomy mansion are filled with sinister secrets. To her sheer horror she begins to question whether the old man could be behind terrifying events that shrouded the ancient walls and stalked her into the very shadows of death and madness.

Plot:  Abby Sanders is heiress to a fortune after the premature deaths of her parents, who died when their aircraft went down.  Her trusted family lawyer receives a letter from William Drake, an old friend of her parents, who invites her to stay with him at his grand estate for some much-needed rest and recuperation.  However, Abby finds Greystone Hall to be a sinister place, the brick walls of it's mansions full of whispered secrets and a ghostly phantom that haunts the halls.  Soon she'll find herself center pawn in a game of murder as she fights to leave Greystone alive!

Gothic Elements:  old rambling mansion/castle, murder for hire, an unsuspecting heiress who has lost her parents to a freak accident, a ghostly phantom that haunts the halls, a specter that appears from a closet, secret passageways, dire letters of warning, disappearing keys and telephones, cut telephone lines, horrible thunderstorms and lightening, blackouts and a flood, a busy-bodied cook, a domineering maid, death by falling down a flight of stairs, a murder plot meant to result in inheriting a fortune

Romance:  Rayne, a successful business and neighbor, fosters a friendship with Abby that blossoms into a romance towards the end.


This was a quick, satisfying read.  I loved the greatly detailed descriptions of the back roads of Vermont and the cold, gray castle.  The characters are each unique and evasive enough that you truly are left wondering 'who done it' until the very end of the book.  This was a fast-paced mystery with enough twists to keep me guessing as I turned the pages.  This book is reminiscent of the vintage gothic romance, though surprisingly just released last year, and by an Indie author nonetheless.  I am very impressed by this book and would recommend to fans of gothic romance, and for those who enjoy a good paranormal mystery with a hint of romance.

My Rating:
Posted by Stacy 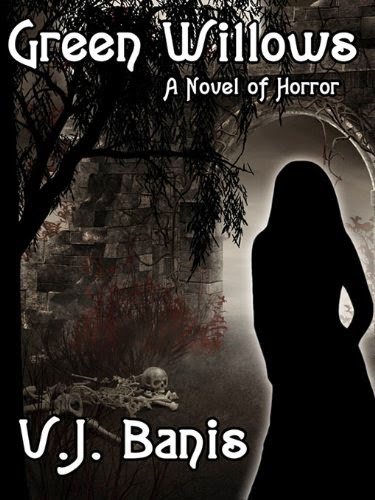 I see two women struggling together by the lake. I see them fall into the water... The wind rustles the branches of the willows and it is the sound of gentle sobbing in the night...


Book Blurb:
Pretty, petite Mary Kirkpatric was not given to fanciful flights of the imagination. But from the evening she came to work as governess at Green Willows, she was convinced that a ghost wandered the dark, rambling halls at night. According to village gossip, it was the soul of Angela Tremayne, the beautiful, saintly, and treacherously murdered mistress of the mansion.But Mary's growing love for handsome Johnathon Tremayne blinded her to danger -- until two members of the household met violent and mysterious deaths, and one night Mary herself confronted the grisly apparition!

Something dark and mysterious haunts the halls of stately Green Willows. Village gossip says it's the ghost of Jonathon Tremayne's wife, the beautiful and saintly Angela, who was treacherously murdered here. Pretty Mary Kirkpatrick, hired as governess to Jonathon’s only child, Elizabeth, quickly finds herself falling in love with the handsome master of Green Willows, and discounts the gossip--until the night she finds herself confronted with a ghostly apparition! A riveting horror novel with a nineteenth-century gothic setting!


Setting:  A mansion called Green Willows.  According to the details of the book, the house was nestled into the hills of Truro, England.

Plot:  Mary comes to Green Willows fresh out of finishing school.  She has no family, spare an aunt.  She is to be governess to a motherless child.  She finds Green Willows to be cold, haunting, and is plagued by what she feels is the spirit of the child's dead mother.  She then learns the truth of the mothers cold heart, her death, and of a poor orphan girl who died as well.  Mary finds herself at a battle of wits with an evil spirit as she tries to save herself and the child.

Gothic Elements:  mysterious deaths, deaths covered up or lied about, haunting, eyes of a painting moving as if alive, mournful wailing from empty rooms, murder, evil spirits, poor governess, motherless child, hateful and domineering grandfather, crippled and wheelchair bound aunt whom appears unfeeling and disagreeable, cliffs and ocean nearby, terrible storms and lightening, a fire that concludes in death

Romance:  midway through the book a romance, and attraction, begins to bloom between Mary and Jonathan.


This book was exceptionally entertaining.  I found myself drawn into the oppressive atmosphere of the house.  This book reminded me quite a bit of the earlier works of Dorothy Daniels and was a well-weaved mystery, part ghost story and part dark mystery.  I was pleased with the dramatic ending, though the final pages of the book left me with a forlorn feeling of helplessness for the main character, as it seemed she never did quite find her deserved happiness.  Perhaps I'm just used to those always-happy endings.  Overall, highly recommend to fans of vintage gothic/gothic
romance.