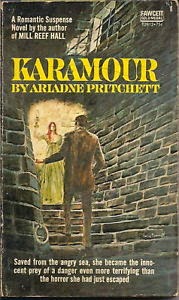 Her sleep was disturbed by a slowly growing sense of uneasiness.  Something was tugging her toward wakefulness.  The strange conversation at dinner leaped into her mind.  Nancy had lied to Hawks.  But why?  She opened her eyes, and in that instant a bolt of lightning slashed across the sky.  Then the room was plunged into blackness.  Again and again the lightning flamed white hot, and in the black sky the thunder smashed down on Karamour.

Suddenly, in the fury of light and sound, Enid realized that her terrifying experience on the rocks earlier in the day was no accident.  Someone had tried to kill her.

They had found her unconscious on a lonely stretch of beach along the Cornish Coast -- a beautiful stranger cast up from the sea.Now half out of her mind with fever and confusion, she found herself an unwilling guest in the gloomy old mansion of the mysterious Mr. Hawks whose wealth and power no one dared to defy.Only Hanna, the superstitious housekeeper, foresaw that the girl's presence meant trouble. "I see bad things, I see death in the fire," she said. Hawks laughed at her. But she was right -- horribly, terribly right...


This book began well enough.  Enid is aboard a ship with her two charges when it crashes into the cliffs and goes down.  By some miracle, Enid is the only person aboard the ship who survives but as she is brought to shore, she's rescued by the enigmatic, rich Hawks, known in the tiny town for his wealth and mystery.

As Enid is whisked away to the big, gloomy mansion of Hawks (who is displayed as a savior of sorts), she's met with a hellish nightmare...a malicious housekeeper who wishes her dead, voodoo spells, a jealous mistress who rivals for Hawks, lies, deception, and the bitter, horrifying truth that someone had actually planned her murder!

Honestly, I was hoping to like this book...but the constant head-bouncing from character to character was exhausting (and confusing) and it takes away from the feel of growing suspense.  It's hard to feel suspense when you never know what's really going on!

As if that weren't enough, with the sketchy plot that's all over the place, the characters in this story are just....loathsome!  I found myself hating every single one of them, even the idiotic main character.  I know this is meant to be a historical novel but inside this book, women were displayed as merely merchandise that men claimed as personal valuables.  Even the women were horrible to each other.  And the men weren't just the regular old thieves or men who'd claimed old money...no, they were ruthless, heartless killers...almost all of them!

I completed this book because I hate unfinished stories.  I would not recommend it, though!

"Someone is Watching" by Penelope Fields (A Short Review) 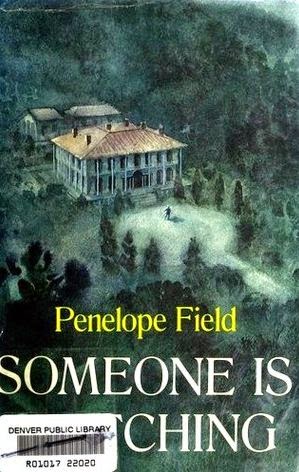 "What happened next is blurred in memory.  I know I panicked...with an increasing certainty of that presence behind me, my hand reached along the wall to my right for a door to any room, found one, opened it.  I was sure the only audible indication of my exit from the hall was a slight click of the latch as I closed the door behind me.  Darkness here.  I strained but could perceive no graying rectangles of windows.  When I tried to secure the door behind me I felt an old-fashioned keyhole and no key, nor did my touch discover a bolt or any other means for locking it.

Pushed through a maze of passages, never did cross the tiled kitchen, but at last, through several small rooms I did no recognize, I reached the dining room.  Even in the country blackness of this November night its light walls gave off a kind of pale ambience and I could make out the vague dark outlines of its heavy furniture.  To the loggia, I thought, and was cheered, remembering its many french windows that could open to freedom.

My cheer was premature.  Before I could reach the loggia, I heard faint and very human footsteps on the kitchen tiles.  The footsteps stopped, as if someone were listening.

I began to run.

Down the loggia and off its center rug I ran, and now across the bare tiles to the french doors on the right- giving my position away, but no help for it.  The doors were locked, the three I had time to try.  If they were only bolted, I could not find the bolts.  And then I heard breathing.  Behind me.  Frantic.  I ran again.  I veered in what I hoped was the direction of the front door.  Stumbling and confused in the darkness, I thought I was cornered, when suddenly I touched the solid carved panels of the front door, wrenched it open,a nd flung myself into the open air.

But my pursuer was after me and now I could hear those footsteps.  My eyes by now were discerning some slight gradations in the outdoor darkness, and I tried to use that slight to keep from falling.  Across gravel, across soft dirt and spongy turf.  I had no plan except to outrun my pursuer- if I could.  I could feel his hot breath on my neck.  I put on a burst of speed, the last I had, and just as my feet touched  solid paving I slipped and staggered, then wheeled to right myself.  Then a great pain crashed into my head.

Lonely after the death of her father, Brenda Wilcox is resigned to a humdrum life in Seattle.  One day a letter arrives from a great-aunt whom her father had never mentioned, inviting Brenda to live with her.  A stroke of amazing good fortune, the letter seems to offer Brenda both a home and a heritage she never anticipated, and she flies to San Francisco to join her great-aunt Mariel.

But someone is watching, watching even in Seattle, where her apartment is ransacked; watching perhaps on the plane, where she meets attractive and sympathetic Jonathan Weatherby; watching certainly at the Palo Alto motel where she receives a threatening phone call; and watching most of all at La Casa del Sol, the enormous mansion nestled in the peninsula hills that is to be Brenda's future- and perhaps her destruction.

Yet this glorious old house proves to be irresistible to Brenda, its strength and grace dating from the days of the Spanish land grants, its luxury and languor recalling the parties of Aunt Muriel's heyday, when celebrities roamed the vast rooms and the classic adobe walls were smothered in new wealth.  But even as Brenda begins to explore her legacy, the romance turns menacing and the once-inviting pieces of family history begin to form the jigsaw puzzle of a nightmare.  The warning signals are everywhere:  the figure who follows Brenda across Seattle, the "accidents" that become too frequent to ignore, the very sounds in the dark.  Someone must be watching.  But who?

And then Aunt Muriel dies...

With it's California setting at striking contemporary characters,  Someone is Watching brings new variations and high suspense to this popular genre of romantic entertainment.

Despite that wonderfully long and flowery blurb on the front and back flaps of the book jacket, this story offered absolutely nothing new to the Gothic Romance genre.

Actually, the story was one of the many recycled variations on the poor, silly girl who roams aimlessly into the great sidewalks of a city, unaware that a regal last relative somewhere (who is also dying) has a vast inheritance just awaiting her.

This book drove me crazy with the weird sequence of events.  The characters were interesting enough, but the story and events just did not add up.

I finished this book solely because I'm just stubborn that way...the ending was rushed and seemed like the author decided she should hurry and pin one of the characters as the guilty party.  The end did not make sense, nor tie in well, with the beginning.

Don't bother with this one...unless you're abandoned on an island and it washes up...then I guess, if you're bored enough, bore yourself some more!


My Rating:
Posted by Stacy