"Invitation to Paradise" by Lesley Howard (A Short Review) 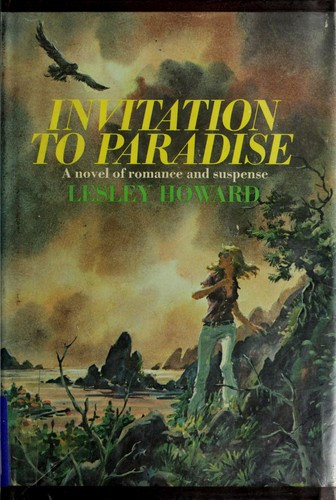 
I was looking for some way of escape when I heard the door open.  I was hidden around a corner, but I could tell from shadows on the wall that whoever had come in was carrying a lamp.

There was nothing big enough to hide behind except a large sofa, and that was such an obvious place that I was growing panicky as the shadows moved around.  I thought of the painting- who would think of looking there if I could manage to get behind it?  By kneeling down I was able to squeeze in quietly.  I held my breath as I listened to someone move on the couch, then stand listening.  I watched in horror as the light got brighter on the little area of the wall I could see.  Then someone was breathing close by, and I knelt, paralyzed like a rabbit, wondering if my thundering heart would give me away.

Would they never go, I was thinking, when the painting was suddenly kicked in against me where I knelt on the floor.  I was discovered- there was nothing I could do...

Cleo travels from her home in New York to tropical Sardinelle, a tiny island right off St. Tropez.  She's been assigned (by a prestigious author of historical novels) to explore some Roman ruins for details that are required for a book.

Yet, the expedition doesn't go quite as planned.  She finds herself being stalked by falcons, trained by barbaric 'Arabs' who are on the island operating in illegal business matters.  As she's climbing the mountain edge, she hears someone call for help and finds herself rescuing a young man from the certain death of being stranded on the side of the cliff.  He says he is certain he was chased off the cliff edge by falcons.

Mark says he came to the island in search of his sister, Olivia, who went missing while on vacation.  Mark believes Olivia has been kidnapped and is to be soon sold into human trafficking.

Cleo finds herself pulled into the dangerous world of looted treasure, kidnapping, and murder amidst the beauty of a strange paradise...but will she survive...will she find love?


This book was decent for a hot, lazy summer read.

I enjoyed the setting of paradise and the story-line of human trafficking as you don't see many romance mysteries with such dire social issues (particularly in the vintage gothics).

I know the book was written in the early 70's, but I couldn't help but feel it was a bit racist in the light that it displayed Arab people.  But back then, I suppose even the topic of human trafficking was probably taboo...so was the author brave, or just stupid?

There were a few scary moments, all in all the book was just a series of odd events all strung together.

The most gothic elements included:  a dagger being found under a pillow, someone being entrapped in the caves of a ruined Roman temple, the main character was locked inside a brick shack and left to dig her way out or die, an overtly sweet housekeeper, a cat was crucified against someone's window panes (a bit gory for me!), kidnapping, murder, smuggled Egyptian treasures.

The characters were not fleshed out well.  And I had trouble finding an emotional attachment to the main character.

If you like vintage gothics, I'm sure you'd enjoy it.

"An Afternoon Walk" by Dorothy Eden 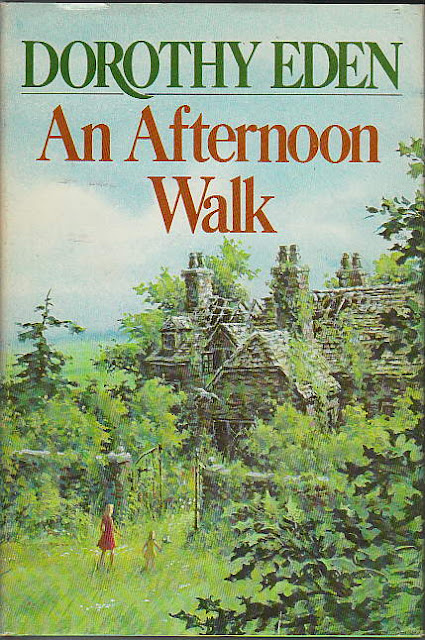 THE SHRILL RINGING OF THE PHONE...shattered the peaceful sun-drenched afternoon.The voice was the voice of a stranger. "Am I speaking to Mrs. Simpson?""Yes," said Ella tersely. "I am Mrs. Simpson.""The very lady I want. Just a word of advice, love. Drive carefully."The caller hung up abruptly.Not that Ella would have wanted to talk to him. She hated the sound of his voice. Very vulgar. But why was he calling her all the time? Warning her? About lots of things. Even about her small daughter, Kitty."Do you know where Kitty is?" the voice threatened.Her husband didn't believe a word of it. Told her she was imagining things. That she was loony.He also didn't believe about the old, empty house she and Kitty had stumbled upon a few afternoons ago.But she had seen the house. And so had Kitty. And now that she thought about it she realized that all her troubles had begun with the visit to that house.There was something dark and evil about the place. Something terrible. But what? And who would believe her even if she did find out?

On a leisurely afternoon walk one summer day Ella and her five-year-old daughter come upon an abandoned house with an eerie overgrown garden. For the attractive young housewife and her imaginative child, the old house conjures up fantasies of grand parties and bygone fashions. But in the midst of the reverie they hear a horrible, throaty scream and, from a second-story window, see the spreading white wings of an owl taking flight.

At home that evening, Ella describes the experience to her husband, Max, only to be reminded that, having recently lost a child at birth, she is still emotionally unstable. Later, pointing out her strange lapses of memory, he insists that she needs more quiet and rest. Ella reluctantly agrees with him and all but forgets the experience, even though she feels it is somehow connected with the sudden disappearance of a woman in the neighborhood.

Then she begins receiving a series of anonymous phone calls. Trapped between the cold neglect of her husband, who openly questions her sanity, and the increasing terror of the calls, which hint that her child is in danger, Ella herself comes to question her own sanity...

Setting:  A safe, boring house in the suburbs where the family resides.

Plot:  Ella (stay-at-home housewife and mother to five-year-old kitty) and kitty take a long walk one hot summer day and discover a beautiful old abandoned Victorian house.  Though the house has been neglected and is falling apart, they fall in love with it's extravagant ballroom and the over-grown garden of wildflowers.  Though a screeching own horrifies them both momentarily, they vow to visit the old house and it's imaginary family again.  Yet, as Ella walks away she gets a peculiar feeling of danger, as if footsteps are following them.  As her fascination for the house grows a succession of prank phone calls and warnings of danger begin, yet her own husband tries to convince her she's gone mad.  Suddenly the news story of the kidnapping of a local woman takes center stage in this bizarre mystery.

Romance:  There's not much romance inside this book.  The marriage of the main character is compromised.  However, toward the end there are overtones of  romance that may blossom between the heroine and her neighbor, who is also a bit of the hero in the story.

I really enjoyed this book.  I totally found myself immersed in the summery atmosphere, particularly where the old Victorian house is concerned.  I love the descriptions of it's empty rooms, the imaginary family that Ella and Kitty concoct for it, and the creepy talk of footsteps on the overgrown garden full of wildflower.  All the talk of summer, flowers, and the weather really gets one in the mood for some hot weather.

I felt the mystery was rather engaging, although the telephone calls get a bit redundant.

The characters in this story were pretty well fleshed out.  I empathized with Ella and despised her cold-hearted husband.

Overall, it's not the best mystery book out there but it is a fun, relaxing, interesting read of the vintage gothic genre. 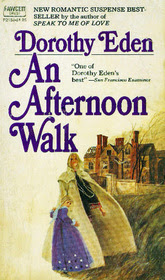 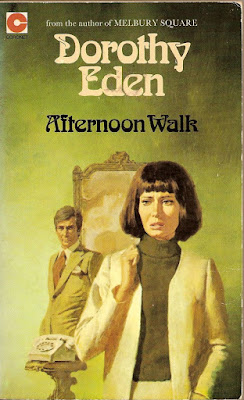