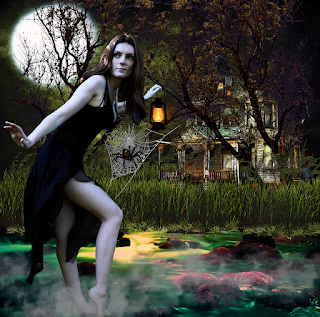 As planned, Greg arrived early the following morning for our promised trip into town.  Libby was busy tinkering with breakfast as I tip-toed across the foyer.  I could faintly hear her in the kitchen.  I realized she must be working alone. She hummed jubilantly as she cooked, no other voices were audible.  Luckily, I was able to avoid another run-in with Aunt Helen and I breathed a small sigh of relief as I climbed into the old rusty Chevy pick-up and situated the seatbelt.

The drive into town was scenic.   I hadn’t remembered how remote the area of the old farmhouse until I watched miles upon miles of flatland and heavily wooded wilderness spin by.  I chilled at the thought of ever being lost inside those woods, but resolved I’d put those ideas behind me and enjoy my day away from the dreary old place.  Greg made small talk, but for the most part he appeared distracted, his brows furrowed against silent worries left unsaid.

The town was bustling with activity as we pulled into the cramped little side streets of the historical district.  As Greg scoured the crowded parking lots for a vacant space, I couldn’t help but think to myself that some things never change.  The tall red high rise buildings in the distance seemed to brush the sky a crimson blur.  Men and women in tailored business suits walked with a purpose, their stiff gait a distinct difference than that of the townspeople, who, in common clothing, strolled leisurely past shop windows and food stands. The Sheriff’s office still sat center of Main Street, pillowed snuggly between the hardware store and a thrift shop I used to love exploring, my young hand held firmly in the grasp of Vanessa’s, as we ran from clothing racks to toy shelves, excited and flush-faced.  I frowned at the thought, a dapper drawn across my high spirits.

“Right this way,” Greg guided me by the elbow after the parking toll was paid to an elderly man at the booth window with a haggard looking face and tired eyes.

“Where are we going,” I inquired as I struggled in my heels to keep pace with his quick stride, not without noticing the intimacy for which we appeared to share as he grasped my elbow and pulled me along.

“Only the most hopping hang-out for smart girls who devour romance novels by day and traipse into the dark of woods on snowy nights,” he winked  at me mischievously.  “And all my treat.”

A few moments later we stepped into what looked to be a pub.  I blinked into the darkness as lava lamps lit each of the four corners of a large dining area.  Contemporary art and slogan posters decorated the walls in psychedelic colors.  A huge wooden sign dangled on chains, suspended from the ceiling at the center of the room, it read in bright hand-scrawl lettering ‘Le Village Café.’

We were met almost immediately by a waiflike blond waitress who ushered us to a table in the far right-hand corner of the room.  The café must have been built sometime after I’d went away to boarding school, for I’d never eaten there.  At a loss with the exasperatingly-full menu, I agreed to a platter of Belgian waffles and mocha espresso at Greg’s recommendation.

As we waited for our food, it seemed Greg was scanning the room almost nervously.  I noticed that from our perch in the corner we had a clear view of the room and its entrances.

“You seem a little on edge,” I finally said, trying to make conversation.  Perhaps he was just bashful.  Maybe Greg considered this a date.  I blushed at the thought and quickly looked away, hoping he would not notice.

“I’m sorry, I’m not being very good company.  Just a lot of my mind,” he fiddled with his glass of water as if struggling for the right words.  “Look, Aubrey, I don’t want to alarm you but there’s a few things I’d like to get straight.”

“You mean about the house…the farmhouse?”  I asked, thankful that at least someone else found the whole situation bizarre.

“Things just aren’t adding up.  At all.  The whole ordeal with Vanessa running away,”  he stopped short, took a few gulps from his glass and sat back against the soft leather upholstery of the booth seat.  “Her and the old man, your Grandfather, they were close.  Real close.  He adored Vanessa.”

“But Greg, Grandfather is rather strict…”  what could I say?  I hadn’t lived under the same roof with the old man in nearly thirteen years.  People do change.

“Yes, that’s it.  He was strict, had a lot of rules, sure.  But never stern.  Vanessa was a spoiled girl if ever there was one.  And all that talk of something crashing or vases breaking, the old man just wasn’t the sort…”  he shook his head and looked away as his voice trailed off.

We waited quietly for several minutes as the thin waitress delivered our trays.  I had never tasted Belgium waffles and lost myself momentarily in the rich, syrupy texture.  The food was exceptional, the iced coffee just strong enough to heighten one’s senses.  I couldn’t remember the last time I’d had such a nice breakfast.  The college dorm cafeteria usually only had oatmeal and cereal with an occasional pastry.  I didn’t want to even recall the dingy, overcrowded lunchroom at the convent.

We ate in silence until, satiated, we both leaned back in our seats.  I noticed Greg had taken to looking around the room once again, and twice over his shoulder.  He seemed at a loss for words and, lost in my own thoughts, I didn’t have much to offer by way of conversation.  Except for questions,  I really had no input.

“So were you and Vanessa serious?”  I inquired.  According to Aunt Helen, they were much too close for her liking.  She obviously had found Greg to be a bad influence.

“Close?  You mean as in dating?”  His eyelids shot up in earnest.  “Let’s get one thing straight.  Vanessa and I were good friends.  Childhood friends.  My parents bought the old Richardson farm who, we were told by the property agency, had both passed away years before.  The place sat unoccupied until my father took the mail carrier job.”  He spread his hands out as if for emphasis.

I nodded my head.  I could remember the Richardsons, but just barely.  I knew Mrs. Richardson was keen on her apple orchard and sold fresh pies to neighboring houses, along with other produce.  Oftentimes you could see both, husband and wife, hard at work in their sprawling garden.  I smiled forlornly at the innocent memory, sad at the news of their passing.

“Anyway,” Greg continued.   “We’ve been neighbors for years.  I’ve gotten your cousin out of more bad situations than I can count, vouched for her with the old man on numerous occasions and usually drove her to school during winter mornings when weather didn’t permit a thirty minute wait at the stop.  But as far as dating, that would have never happened.”

“Hm, that’s odd then,” I said, shaking my head.  “Aunt Helen seems to feel that you were a bad influence on Vanessa.”

“See, that’s what gets me!”  He slammed his open palm against the table, momentarily bringing the attention of fellow patrons who sat nearby.  “Vanessa wasn’t even interested in dating.  And this Keith fellow, he was just another guy who admired your cousin.  Oh, she was a pretty girl, no doubt,  and they went on a date or two but her heart was set on going to some beauty school out West.  That’s just why it doesn’t add up, not at all.”

“So then,”  I said, my hands growing cold and clammy.  “Someone is lying?”

“Exactly.”  He spit out the words, his face turning a light shade of pink.  “Or they are doing some heavy-duty covering up of something.  And I don’t know what yet, but I’m determined to find out!”

Please check in weekly for updates every Thursday as I continue to make this story available!
Posted by Stacy