"Threads of Intrigue" by Lynn Williams 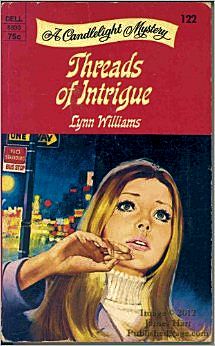 Leah took a deep breath.  It was against her better judgement but Doris was a friend.

"All right, Doris.  Give me a couple of hours."

"Leah, you're the greatest! Thanks a million!"

Leah wished she hadn't promised the moment she hung up.  But she was committed.  She waited until about eight before she caught a bus and went back to the office, crossing the familiar lobby, quiet and empty.  She had forgotten to turn in her key, so she let herself in and flipped on a light in the hall.

There was no answer.  Leah frowned.  That was odd.  Doris had been so anxious for her to come.  Where was she?  Then she spotted a light burning in Sarah's sewing room.  Doris must have stepped in there for something.

Leah's words came to a full halt, dying on her lips.  Doris wasn't in the sewing room.  But Sarah was.  Sprawled on the floor.  Very still.

Leah quickly bent over Sarah and saw the ugly bruise on the side of her head.  There was also smudge of blood.

But no matter what she did, she could not revive the woman...

Talented and lovely Leah Jordan entered a maze of mystery when she came to work at Mimi's Fashions in New York. Mimi was a legendary designer known for her strange moods, but artistic temperament alone could not explain the fear in Mimi's eyes, nor the peculiar after-hours goings-on that Leah stumbled upon while working late one night.

When she was suddenly accused of selling the company's designs to a rival firm, Leah realized that someone was trying to get rid of her. She could not even trust the handsome, charming business executive, who said he loved her, to help her cut through the cunningly woven pattern of evil enveloping her. Then murder struck, and Leah knew she was fighting not only for her budding career but for her life itself, in a world where beautiful fashions hid some very ugly secrets.


Candlelight romances were released by Dell.  Their line of books were released in several diverse genres, much the same as Harlequin and Love Inspired books are these days.  My research for other titles in their mystery line didn't yield much success.

I can't speak for any of the other Candlelight Mystery releases, but this one read much in the same fashion as a vintage gothic romance with a modern twist.  The main character, Leah, felt that she'd found her dream job working for the prestige garment company Mimi's Fashions only later to be drawn into a bizarre web of mystery and murder.

Between working, juggling several romantic interests and dealing with her personal family drama, Leah finds her own welfare threatened as bodies begin to drop at her designing firm.  Could it be a rival garment firm, or something more sinister?

This was a quick, fun read.  I enjoyed it very much and hated when it ended.  I'm afraid I'll probably never find another gothic suspense related to the fashion industry, but the topic was weaved into the story so effortlessly and gave it a very compelling twist.  Highly recommend.