I love digging through these old TV shows and resurrecting, per say, the episodes that I feel are reminiscent of the vintage gothic stories.

Maybe it is because of the times back then and how these types of story-lines were rehashed and rewritten over and over. Perhaps the Gothic Romance story-lines were just that appealing to the common-day audience at the time.  I think they would have had to have been, considering the ungodly amount of paperbacks that once littered store shelves.

Yet, I found the plot-theme of this episode eerily presenting of so many of the gothics I have read over the years.  Same plot, just enough of a twist in characters and story-line to define it as a whole new story.

Season 1 Episode 5, 1960, Hosted by Boris Karloff , An aging actress is mysteriously found dead in a family's garden, and they may know more about her death than they will admit.
Written and Directed by: Maxwell Shane
Posted by Stacy

"Naked Once More" by Elizabeth Peters (A Short Review) 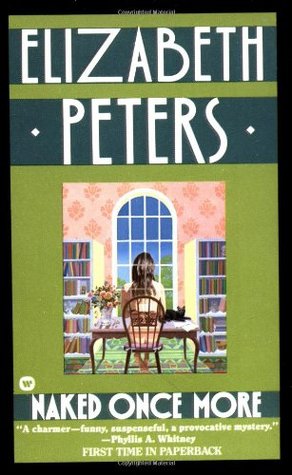 She may be a bestselling author, but ex-librarian Jacqueline Kirby's views on the publishing biz aren't fit to print. In fact, she's thinking of trading celebrity for serenity and a house far away from fiendish editors and demented fans when her agent whispers the only words that could ever make her stay: Naked in the Ice.Seven years ago, this blockbuster skyrocketed Kathleen Darcy to instant fame. Now the author's heirs are looking for a writer to pen the sequel. It's an opportunity no novelist in her right mind would pass up, and there's no doubting Jacqueline's sanity...until she starts digging through the missing woman's papers - and her past. Until she gets mixed up with Kathleen's enigmatic lover. Until a series of nasty accidents convince her much too late that someone wants to bring Jacqueline's story -and her life - to a premature end.


I have read (and own many) Barbara Michael's books.  So, I figured since the same author wrote this book (albeit published under the pen-name Elizabeth Peters) that I would find it just as enjoyable as the dark, brooding, gothic mysteries of Michael's.  Boy, was I wrong!

This book is a simple who-done-it mystery.  Not only that, it's only one of a complete series (I also was not aware when I began to read it) so there was some references to earlier stories that I did not fully understand.

To make a long story short, Jacqueline Kirby as come to a writer's retreat in order to solve the disappearance/death of a famous romance writer.  She must eliminate the suspects and get to the truth.

Honestly, what I remember most about this book is the meals she ate.  The ending did surprise me, I totally did not see the ending coming.  However, the rest of the book is predictable and...yes...boring!

Only read it if you don't have anything creepier at hand! The dim yellow wall lights in the upstairs serve merely to cloud the eyes.  "Kitty?" I called softly.  I stood still, listening.  "Kitty?"

I must have known where she had gone.  I must have believed she wouldn't play tricks on me,that malevolence wasn't in her nature, to lie in wait for me in the dark; I still believe it.  It was one of those accidents of timing, and Kitty, thinking I was still with Father Boneau, or not thinking at all but impelled by inner grieving, had simply taken advantage of the moment to linger behind and offer up her penance, perhaps even her prayer.

I turned the corner and went silently to Mother's room. Inside, the thick darkness was only faintly yellowed by hall lights. I crossed the carpet toward the dressing room.

I stopped moving as if I had stepped off a precipice.  Mother! She was bent over the dressing table once more, in her long white dress, her forehead resting on the glass...

A scream (whose?  mine?)  rose and spit the darkness, seemed to pierce all the rooms of the house.  A familiar pain stabbed me, I was falling steeply, groping in the black rushing air, and even after the white figure moved and became Kitty I continued to fall, pain and darkness engulfing me until the last pinpoint that was myself disappeared in space...and, like a tiny light, went out...

Althea North has come home to Northwater a very different person from the wild and beautiful girl who left the New England mansion eleven years before.  She has lived through a disastrous marriage to an Italian Count, a harrowing bout with narcotics and several promiscuous love affairs.  Now, Althea has returned to settle an account with her life - and to die.  Ill with an incurable disease, she knows she has little time to find the peace she longs for or to help her younger sister, Kitty, who is tormented by the mysterious death of their domineering mother.

Althea sets to work to reopen Northwater and to become reacquainted with Kitty and her husband Jack, the garage mechanic whom Kitty married in defiance of her mother's wishes.  Plagued by her worsening illness and by terrible nightmares of her mother's ghost, Althea tries desperately to uncover the horror of her family's life and death.

As her relationship with Kitty deepens, Althea slowly develops friends among the people of the town who at first view "the Countess Branzini" with suspicion.  Then, as if by a miracle, a never-before realized capacity to love.

Writing in the same graceful style that made The Tower of Kilraven so popular, Cecily Crowe weaves Althea's strange story against the background of life and its conflicts in a New England resort town to create a novel of ever-mounting suspense which ends only at the last - and crucial - confrontation between the two haunted sisters.


This short novel was so eloquently written that I would almost label it as literary fiction, even though it was released in the Gothic Romance genre.

Another reader described this book synopsis as deceptive and simple and I would have to agree.  Short as it was, this story was powerfully chilling (both emotionally and psychologically).  The main character, Althea, has had her share of living (drugs, affairs,etc) and has recently discovered she is terminally ill and so decides to return to her childhood home, an old mansion in the backhills of a sea resort town.

The plot of the book revolves around Althea's guilt, as well a that of her younger, more vulnerable sister, over the mysterious death/suicide of their mother.  Althea seems to be struggling with a primal, deep-set guilt and is seeking forgiveness...mostly that of herself.

The novel has deep, sinister undertones.  The echoes of old ghosts.  Family sagas and secrets. And a mysterious death.  I had the feeling of something evil constantly lurking in the background.  This is a read I could not put down!