"The Phantom Cottage" by Velda Johnston 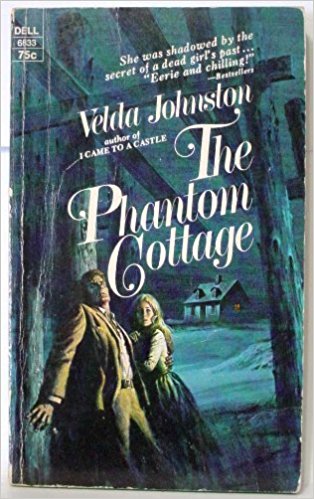 I blurted, "Last night someone drugged and kidnapped me."

With those little eyes never leaving my face, I stumbled on.  I explained how everything...the candle flame, the flowers and faces that swam across my eyes, the black-coated figure across the room...seemed to change shape and size.  And how I knew, even through the drug, that they were all involved in Laura's death.

The Police Chief stared at me belligerently.  "You'd better go back to New York, Miss,"  he said, "and go talk to one of those fancy head doctors."

As I left, I was almost convinced that he was right...that I had gone stark, raving mad.  Then, for the first time, I saw the rope marks on my wrists...

Jane Warren was fleeing the memory of a broken love affair when she came from Manhattan to the windswept solitude of the cottage by the sea.  Neither the howling of the wild dogs in the swamp nearby, nor the strange hostility of the local townsfolk, could weaken her resolve to live here until her heart was whole again.

Too late she realized she had entered a dark labyrinth where every turn revealed a new horror of the past...where a man she could not bring herself to trust gained frightening power over her...where terror pursued her toward a final monstrous revelation of evil in....the phantom cottage.


Jane is your average New York City girl.   As a self-employed illustrator, she can afford to take her own vacation when her long-time boyfriend leaves her jilted for the more promising prospect of his employers daughter.


Jane has also just buried her only true friend, Laura Crane, who died tragically in a hit and run accident just days earlier.  The elusive Laura who refused any type of personal disclosure, yet also harbored the innocent love of animals.  Laura had phoned Jane in the middle of the night, upset and frightened of something...or someone, yet had been killed minutes later as she made her way to Jane's apartment in the dark.

Desperate to be away from a city who'd left her heart-broken, Jane escapes to the tiny town of Garth, nestled at the edge of Cape Cod.  Garth, the city for which her belated friend Laura had mentioned in passing once before.

Jane was only looking for a quiet, scenic town for which she could remain anonymous as she nursed her broken heart.  Yet, what she found was the phantom life of some other girl.   As it turns out, there was much more to the story of Laura than she could ever have imagined.  And as she struggles to put together the puzzle pieces of a life that Laura had escaped from, she's met with ludicrous secrets, lies, and murder!


Best Description of Cape Cod:  Every once in a while, something lives up to your expectations of it.  The Cape was a different world.  Soon after I crossed the canal and began to drive up the old Cranberry Highway, the last of the drizzle gave way to a wispy ground fog.  It hovered in the hollows of the almost deserted highway and swirled between the black-trunked pines like smoke...or like the wraiths of those long dead.  Well, I reflected, if any part of this nation was haunted, the Cape should be.

Best Gothic Elements:  an unsuspecting girl being drugged and kidnapped,  an old murder mystery, hidden/switched identities, a political scandal, a wild pack of dogs in a marshy fog-ridden swamp, a cottage beach rental by the sea, hit and run murder, an attempted hit and run, digging through the old newspaper periodicals for some sensational murder story from the past, small old historical towns, the use of LSD to drug a victim.


This is on of my favorite books by Velda Johnston.  It contains everything for the making of an irresistible gothic romance mystery.  I particularly like the setting by the sea, especially the little rental cottage and the main characters forays on the beach.  These little details really pulled me into the atmosphere of the story.