"Come to Greenleaves" by Kay Richardson 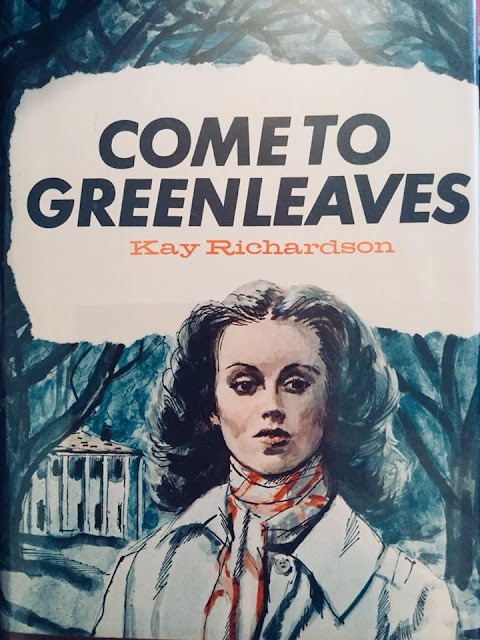 The telephone call came two nights later, as I was getting ready for bed.

It was impossible to tell if the voice was masculine or feminine, old or young.

"If you value your life, get out of that house."

There was a click, and the dial tone sounded in my ear.  My heart began to beat rapidly, and my body trembled as though I had caught a chill.  I looked about the room, and it seemed suddenly strange, unreal, like a set for a play.  Outside, a wind had come up.  A breath of icy air fanned my warm cheeks.  Somewhere a door banged.

I wen to the window.  Outside, all was darkness.  The wind scraped the guava bush against the house.  I peered through the trees in the direction of Greenleaves, but no comforting light shone through the darkness...

Greenleaves had been the Bennet family's estate for generations, and Emily Bennett, orphaned as a child, had grown up there.  So when illness forced her to leave college, it was only natural that she return to the haven of Greenleaves to recuperate.

Beneath its peaceful surface, however, Emily found some disturbing elements.  Her semi-invalid grandfather, Adam Bennett, was more and more under the domination of officious Aunt Jessica.  And Monsieur Boullanger, who had suddenly emerged out of her grandfather's past, seemed to have some mysterious hold over the old man.  But most immediately disturbing to Emily was the discovery that Emmett Kehoe, whom she had loved since she was a child, was expected to announce his engagement to her beautiful cousin, Sylvia.

When Emily returned from a cruise, a birthday gift from her grandfather, to find the old man on his deathbed, she felt her leaving had been particularly ill-timed.  But when she discovered that her grandfather had written a new will in her absence nd that she had been disinherited in favor of her Aunt Jessica, she began to suspect that more than ill-fated coincidence had been at work on the timing of her trip.

That was just the beginning of a series of events that soon brought Emily to the terrifying realization that someone was after more than her inheritance...that every day that she remained at Greenleaves put her life in great jeopardy.


Someone Is Waiting In The Dark...

I had other thoughts on my mind besides my cousin's romance.  I was anxious to get back to the cottage.  I wanted to call Mr. Reynolds.  His coming to Greenleaves like that, during the dinner hour, and without even having telephoned first, seemed to be out of keeping with what I knew about the gentle manager of the Refuge for the Blind.  Even Minna had detected that Mr. Reynold's request to see my aunt had been an urgent one.

Halfway between the house and the cottage, I thought I heard a voice in the distance calling my name.  I stopped, and once again the sound came, barely discernible because of the wind rattling through the branches of the trees.

I listened intently, but there was no answer.  The dark trees on either side of the road obscured my vision.  A nameless fear took hold of me, and I began to walk faster, Steel close behind me.

Suddenly I felt something whistle inches over my head.  A moment later the moon disappeared behind a cloud.  Panic overcame me, and I began to run, knocking blindly into the branch of a tree.   A minute later I felt the thong on my sandal break, tripping me.  I plunged forward, trying with my hands to break the fall.

Steel's barking was the first sound I heard as I struggled back to consciousness.  Next, I heard footsteps...


Were They Rescuing Her...Or Were They Kidnapping her?

"The main problem right now is to ensure your safety," Talbot continued.  "Nikki has come up with a plan.  Friends of hers own a small cottage on the Mensona River.  The friends are wintering in Arizona, and they left Nikki the key to the cottage.  You could stay there for a few days, long enough for me to come up with evidence I can take to the police."

"Nikki can provide you with everything you need," Talbot said.  "Believe me, if I did not think this move necessary, I'd never suggest it."

I agreed to go with him.

Within an hours time we reached the small cottage Talbot had spoken about.  The cottage was right on the river bank.  Nikki met us at the back door.  In the small, rather shabby cottage she presented an incongruous appearance in her exotic and expensive looking hostess gown...

I wanted to like this book more, but the mystery was almost flat.   Someone is out to steal an inheritance.  It's a basic who-done-it, but with so many characters that I almost got confused just trying to keep them all in order!

If you enjoy reading gothic romance, you can give it a go.  It's not the best I've read, but not the worst either.  If your TBR list is long, pass this one up!